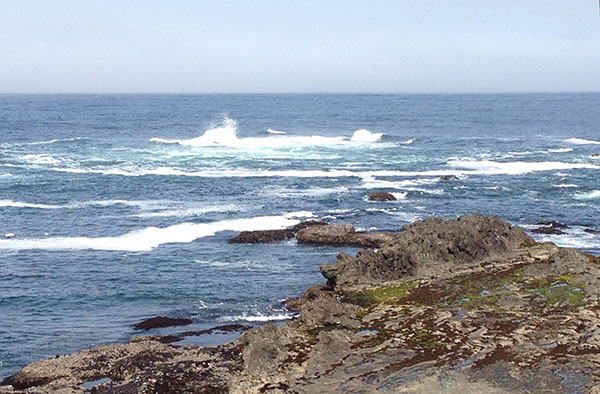 Part One: The Flight West

I love the ocean. Looking out and seeing nothing but blue sky and crashing waves relaxes me more than an afternoon of smooth jazz. Watching the ships coming in and wondering where they’ve been brings on the quintessential lure of the sea. So when Snowball asks me if I wanted to visit a little seaside town in northern California nicknamed the Gateway to the Redwoods, I jumped at the chance. Then she explained that the reason for the trip was that an item on her mother’s bucket list was to see redwoods and I became somewhat conflicted. Then she revealed that her aunt and uncle were also coming. At that point I pictured guiding lost souls through the seven circles of vacation hell. It turned out not quite that bad, but it did have its rocky moments.

Our group for the trip consisted of six, Snowball and myself, her eighty-something mom, her mom’s sister and brother-in-law, and their twenty-something, college-attending granddaughter. Now, Snowball’s aunt and uncle are great people and the very definition of salt of the earth. But their front yard is the Mississippi river and sometimes the big city stresses them out. So together we are five flat-lander, grey-hairs and a coed headed for California – what could possibly go wrong?

More than I love the ocean, I hate airports. Beginning with the endless check-in lines, then more lines standing shoeless with your stuff in plastic bins and your arms over your head. For an extra challenge, Snowball loves to take every piece of photographic technology known to man, cameras, laptops, external hard drives and scanners wherever she goes. It all goes along with being a semi-professional photographer. I call the rig her tech bag.

We did online check-in the night before so the airport procedure seems to go pretty quickly at first. But by the time five of us have gotten through the line I look back to see the TSA guy say to Snowball, “Could you please step over here, ma’am?” I can also see the woman at the machine that x-rays the carry-ons has gone white as a sheet and has eyes as big as saucers. She is scanning Snowball’s tech bag. Of course the next step is to open the bag and go through all the stuff. Eventually they find the culprit. Who knew that a portable 3D scanner would look so much like a pipe bomb under the x-ray machine?

The actual flight to the Denver hub was uneventful. It was even quite smooth until we got over the Colorado mountains. But that’s to be expected. As I said to Uncle-of-Snowball, the same thermals that eagles like to fly in make it rough for us.

We only had 30 minutes between our arrival and connecting departure but the gates were quite close so that was Good. The Bad came when we found out that “Unassigned Seat” on a boarding pass means United overbooked the flight and Snowball, the de facto leader of our group, and Mom-of-Snowball may not be joining us in San Francisco right away. The ticket agent at the gate is focused on her terminal, typing madly while a second agent makes that often heard announcement asking if there is anyone who would like to wait for the next flight in addition to getting a credit for another ticket.

Not being a seasoned traveler, I decide to mildly panic. Do we all wait to see if everyone gets a ticket eventually? Or do we somehow just meet again in the San Francisco airport? I finally get target fixation on getting those who can get on the plane moving. It isn’t until I sit down on the plane for a few moments and stop hyperventilating that I realize I had an easy out. I could have given my seat to Snowball and gotten a ticket home outta this mess. I wait and eventually see Mom-of-Snowball board the plane several rows in front of me. I never see Snowball board the plane. I’m thinking the good side of this is I’m getting hungry and we’ll have plenty of time to eat while waiting for Snowball to catch up. It’s not until leaving the plane in San Fran that I see we have all made it. The United ticket agents were superheroes.

Here’s where the unwise decisions really start. Aunt-of-Snowball and her granddaughter the coed need a pee break. But we have mom-of-Snowball in a convenience wheelchair and one of the porters helping. We don’t want the porter to have to wait so Snowball tells me to wait for her aunt and help them get to the baggage claim.

Well, I wait a long time till it finally dawns on me that coed can read and they can probably find the way to the baggage claim on their own. They did – I was the one that got lost. I eventually find the baggage claim and start looking for the group at the busiest carousel not noticing that there are a dozen more. I finally hear myself being paged telling me that my party is waiting for me ten carousels away from the one I was at. I get there and we are finally all together ready to start our journey north.

Next installment: The roads from hell meet the van from hell.

One thought on “From The Seas to The Trees, Pt 1”