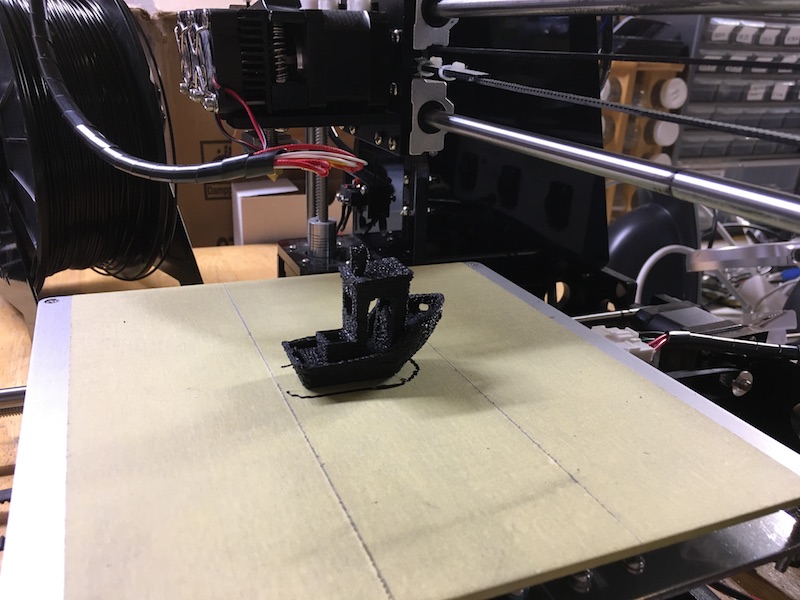 Late last winter Snowball bought a 3D printer kit. You may have heard of them but if you’ve never seen one it heats plastic filament in whats called an extruder. Then this hot extruder is moved around in three directions while the hot plastic comes out and forms an object. Now you have to realize the price of most turnkey 3D printers range anywhere from $700 to $2000 depending on the size. This kit, with two extruders, was around $200. The first indication we were in for trouble was when we discovered it had a bazillion parts and the assembly instructions were made up only of pictures and diagrams with labels in Russian and Chinese.

Snowball and I counter balance each other well in most situations. She has a sky high mechanical aptitude and she teaches classes in 3D printing. I have years of experience in electronics technology but know nothing about 3D printing so only working together did we think we had a chance with this kit. We spent several weeks of quality spare time together in assembly steps and I have to admit she was amazing at figuring out which part went where.

Finally the day came when we switched the thing on. The motors actually moved… until we hit the Home button and the thing started making this horrible ratcheting sound in all three directions at once. After that finally stopped we thought OK let’s try heating up the plastic extruders. The thing did nothing for about a minute and then shut itself totally down. It was time to call it a night.

Well it was getting to be springtime and lots of other things started taking up our time. The garden needed planting, the lawn needed mowing. The printer got buried behind some tables normally used for crafts shows. But in the back of our minds we both kept thinking about getting that thing working – because 3D printing is just so cool.

Winter is a little quieter around here so after the holidays I figured I had some time to take another look at the printer. I got snowball to slow down long enough from her jewelry making to work with me to load some control software. That gave me a handle on a starting point for trouble shooting. The first problem I fixed was the heaters that were hooked up backwards. No more automatic shut downs. Then I found the sensors that were plugged into the wrong place and that stopped the ratcheting. More heating problems were discovered and fixed when I found the power supply was hooked up wrong.

The next step was to actually try to print something. On the internet I found a file for a boat that is used to bench test 3D printers called, appropriately enough, Benchy. Now you understand my build a boat in the garage reference.

The first couple of attempts ended up looking like a Star Trek transporter accident – shapeless lumps of plastic wrapped around the extruders. It seems like this kit with a bazillion parts also has a bazillion adjustments to make.

Well now after about half a dozen tries, much reading and Youtube viewing, I finally got something that almost looks like the digital object it was made from. Snowball has sent some files too with varying levels of success. Its all a learning process which goes on that Snowball and I enjoy for its own rewards. Of course if you want to jump into the hobby with object success right away I do not recommend this kit. You will have to pay a lot more for something that works unless you are a mechanical and electronics genius.