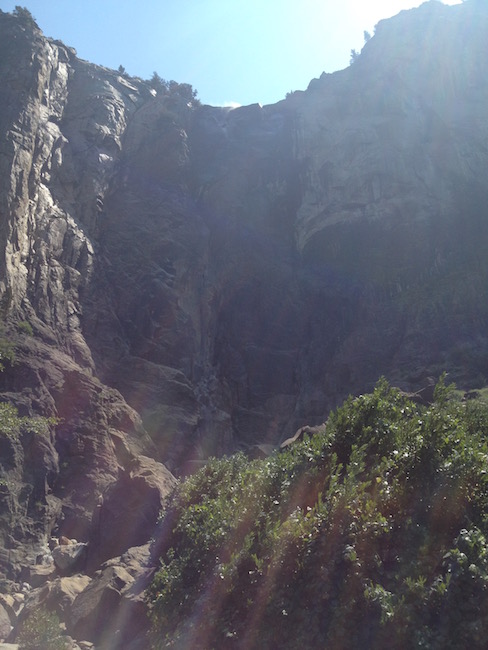 Our planned course was to take the shortest route to Interstate 5. We figure this had to be the least squiggly, and most direct to Sacramento. There we would cut off to Sonora where we had room reservations.

To get to I-5 was like the old saying – you can’t get there from here, you have to go somewhere else first. Our route goes essentially north, skims through a small piece of Oregon, then back east to the interstate.

During this leg was the first time we really smell the wood smoke from burning forests. It is even stronger than the ever-present smell of over-heated van transmission. We are passed by many trucks marked with various forest fighter divisions. We know we are close but never see any areas actually burning. We do however see a lot of dry grass and underbrush. When we get out to walk and take pictures, the dry, brown grass crackles underfoot.

It seems a very long leg of the journey – and in reality it is. About mid day, Snowball begins looking through her papers, both hard copy and digital, to find the name of the motel we are headed for. Its not normal for her to be missing information like this so I know she has hit the wall concerning stress and fatigue.

The Town of Sonora

We finally arrive at Sonora, a little town of many, many little shops. We pull into the Best Western because thats the chain we’ve been using up to now. They are fully booked and have no record of a reservation for us. But once again we are saved by super heroes as they call around town to find our reservation. They find it at a competitor almost directly across the street. The folks at Best Western have been glad to help because we already have reservations for that chain at our next stop.

We check-in and decide to walk along main street to explore some of the shops we saw on our way in. Most of the shops are closed so dinner pops up to the top of the list of activities. I’m close to my own wall of fatigue so I bow out and plead with Snowball to bring me something back. They haven’t yet decided where they are going so I realize its gonna be potluck. However comments were made about a steakhouse seen on the way in so I’m hoping for the best.

A hot shower and a couple of hours later, they return. I guessed right about the steakhouse. Snowball hands me a take-away box and I open it to find shrimp scampi!?! “What kind of punishment is this you go to a steakhouse and bring me seafood?” I ask.

“To be honest the steak wasn’t that good. Here I brought back what I didn’t eat.” she hands me her take-away box with several ounces of remaining sirloin.

After I finish the shrimp, in accordance to several million years of carnivore evolution I finish the steak too. It wasn’t corn fed from the Beef State but it was still pretty good. The report was the scallops that Uncle-of-Snowball had ordered were extremely disappointing too.

The Splendor of Yosemite

The next day we set off to see the sights of Yosemite. Uncle-of-Snowball wants to check off his bucket list entry of huge waterfalls. No one wants to be the one to tell him he might be in for a disappointment due to the California drought conditions.

After a long, picturesque, curvy and kinda scary ride along roads that should have a lot more guard rails, we arrive at the park. I don’t have the superlatives to describe this place. Tall trees, taller cliffs and rock walls. I take a walk in the forest at one point and go about 50 yards from the road. It is totally quiet. The smell of evergreens is like being surrounded by real Christmas trees. Not those fake ones with the scent poured on them – this is the real thing. The silence is broken by a rustling sound behind a tree nearby. This reminds me that the group is waiting for me so I walk back briskly. I don’t want them to have to wait for me – yeah that’s it.

After finding the information stand and having a long talk with one of the rangers about how to get to the various sites, we continue on to the first on our list, Bridal Veil Falls. A winding road over bridges and through tunnels brings us to the parking area. We follow a sign at the beginning of a trail to the falls which says the distance is a thousand feet. When I say thats over a fifth of a mile, uncle quiets me. A thousand feet will sound much shorter to the the group. What the sign doesn’t say is that its all uphill.

Bad knees and sixty-year old cardiovascular systems aside, we eventually make it to the falls. On the way returnees have been warning us of the unfortunate trickle we were about to find. When we look up, we see nothing but a mist at the top of the mostly dry rock wall. Its almost just as amazing to think of the way nature has changed in this area from the old pictures of torrential falls we’ve seen.

After a couple more photo stops for large rocks and even a hundred and fifty year old cemetery, we decide to wind our way back to Sonora. Tired from a long week of traveling we are looking forward to one last road trip to San Francisco tomorrow and dinner at Fisherman’s Wharf.