I’ve wanted to write on the recent events in Paris and about terrorism in general. I wrote several articles I knew were only knee-jerk reactions which I didn’t publish. The first version I wrote was akin to rounding up anyone who had ever walked into a mosque and chasing them down with torches and pitchforks. However colorful the imagery of that article it did go a little over the top. In another I preached universal brotherhood along the lines of why can’t we all just get along. But I’ve done that already so I didn’t want to repeat myself. Then I decided that I needed to look at the patterns causing this latest blight on the human condition. It’s all boiling down to one of  the most basic of ‘them vs us’ reasons, religion.

I follow a spiritual path other than any of the Judeo-Christian ones followed by the majority of people in the western world. This gives me a unique point of view while watching the history of conflict. From here it’s easy to see that from the early Egyptians keeping the Jews as slaves to the “Burning Times” in Puritan New England and “The Troubles” in Northern Ireland to name just a few from a very long list, it has always been a case of “Them unholy people and their god versus Us chosen people and our God.” And every time it is spiritual beliefs that gives an excuse for each group to cause death and misery to the other group.

We can’t blame religion as the bad guy here. It’s in our genetic makeup to need to believe that there is something outside ourselves. Even if you believe “We are all God” it’s still a spiritual stand. 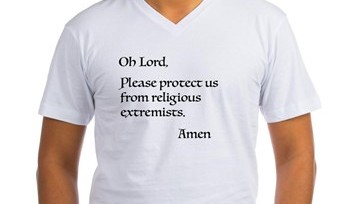 The bad guy here is religious pride. For example, an extremist might say, “I’m proud of my god and you should bow to him.” Then when the other guy doesn’t bow, instead of respecting his rights to believe as he wants and saying “Ok it’s your soul that’s lost”, the extremist shoots him.

For a short, interesting religious discussion check out the scene in the 1982 version of Conan the Barbarian. Conan asks Subatia “What gods do you pray to?” The two men are both proud of their gods. One god is powerful because he lives in a mountain and the other god is the four winds and powerful because he lives above the mountain god. But it all boils down to the two men judge each other by their belief in their respective gods. This demonstrates how man has identified with their gods since they drew pictures on cave walls. As a friend once put it, “We each make God in our own image.”

Now if you take this to another step you might think that I saw Charlie Hebdo as being in the wrong for satirizing Islam. Nothing could be further from the truth. The actions the magazine was taking was never an insult to any person. The problem comes from the extremists who don’t find themselves as being a person, they are too wrapped up with personalizing and anthropomorphizing their god. What should have been in the eyes of Islam when people created those cartoons is that the artists are only damaging their own souls. Any extremist should see this and just say, “Hey great! These guys are sinful and never going to (my version of) heaven. That leaves more virgins waiting up there for the rest of us.” instead of shooting everyone.

One of my strongest beliefs is that everyone must find their own way to spiritual enlightenment. I’m strictly against evangelizing. Whether its Islam, Billy Sunday or Jehovah’s Witness, thrusting your beliefs on someone else is like raping their soul, and every bit as offensive as physical rape.

That doesn’t mean if someone asks me a question I can’t educate them about a subject many people have the wrong idea about. But I would never tell someone my spiritual beliefs are right for them or they are wrong for worshiping in a church, temple, mosque or whatever. I certainly wouldn’t put a hit out on someone who drew pictures of ugly women with warts on their nose riding on broomsticks even though it is offensive. For these types of religious based conflicts to end we must all be left alone to find our own path.