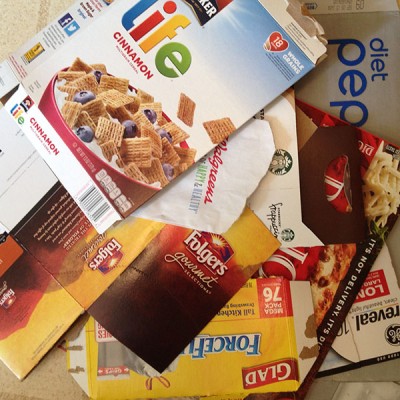 I know I watch too much television. Sometimes my dreams are just a jumbled continuation of what I was watching earlier. But I seriously don’t know why I should dream of being a prisoner in a Chinese prison camp. All I know is the way we escaped may just be the answer to world peace.

In the dream we were a bunch of Americans being held for who knows what. As in every POW movie, our captors made the prisoners keep the camp clean. The weird part of that was all the litter they were making us pick up was litter that could be found on American highways. The infection of homesickness that these little pieces of litter brought us made us pull together with the enthusiasm to break out.

We have all seen prisoners brought home from being held far away and how all they want is something like pizza or a hamburger and a Coke. Scenes like this help us realize what a good life the commercialism and capitalism of America has brought us. So I think its time we start telling other people in the world and in a big way. At the same time we can help clean up our own country.

Every night on the news we see those grainy, missile-eye-views of attacks on ISIS and Al-queda. In addition, we see our politicians debating how many more bombs we need to drop on them. What is really needed is a more peaceful solution. I propose a new, non-lethal weapon, the Highway Litter Redistribution System or H.L.R. pronounced, hurler. Think of a hurler system as basically a huge, high-tech trash bag, probably painted Air Force blue, that is designed to hold together until it gets hit with a high wind. Here’s how it works.

Most people today recycle their cardboard, plastic and glass. I know I try do as much as I can. But still as we drive along the highway we see litter. The highway department goes out as much as possible and picks this up and then takes it to the recyclers. What I would like to see is all of this used product packaging collected from the recyclers and highways, then packed into hurlers. These hurler systems would then be shipped as weapons in the bombers to the battle zones. The H.L.R. would be released from the bomb bay and would tear open as soon as it hits the slipstream outside the aircraft. The litter would disperse in a random pattern on the unsuspecting population of third world countries we want to tame.

Just imagine the psychological impact our commercially branded trash would have. Thousands of times stronger then the propaganda leaflets of WWII. I can already picture this week’s head of ISIS leaving his cave and seeing an empty box of Cialis laying on his ammunition pile. As soon as he finds out what E.D. means in his language he’ll have everyone drop their rifles and exchange their burkas for Old Navy.

The bigger advantage for us would be that it would finally be in our national interest to cleanup the country’s litter. Uncle Sam wants you – to pick up that pop bottle.