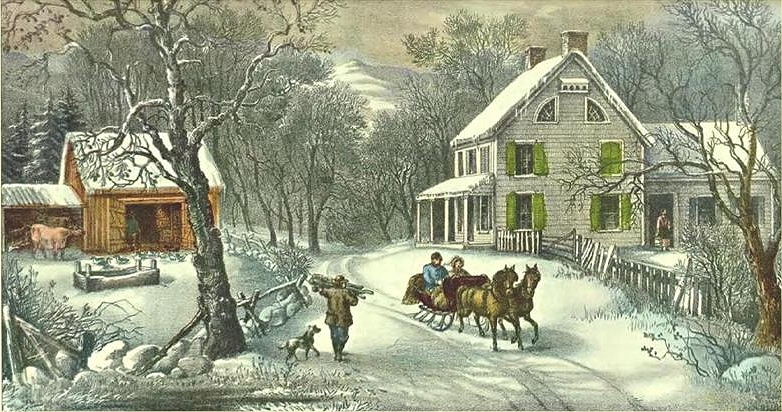 This year it looks like the area I live in is not gonna get heavy white stuff for Christmas. But I’m not sure that makes up for the years when we had to walk through shoveled sidewalks that were reminiscent of World War 1 trench warfare and drive on streets full of wishes and hopes. The white snow matching your white knuckles as you wished it wasn’t so slick and you hoped you didn’t hit anything.

Where do people who yearn for a white Christmas get the memories that make the cold stuff seem at all preferable? There can’t be that many who grew up in a Currier and Ives lithograph, or perhaps are from New England which is uniquely beautiful when the fall foliage reaches its peak, but a month later the snowfall makes it so that the only way to enjoy the outdoors is through a window.

A hundred years ago or so we were forced to endure the weather. There was no central air in the summer and during the winter heat was supplied by a fireplace. Maybe that’s it. Gathering around the fireplace can be the basis of many good family memories. But you don’t need snow to do that. In fact you don’t even need cold. If all you really want is a family gathering around a fireplace all you need is a fireplace and a family.

Remember, for half of the planet Christmas happens in the summer time. Well, to be precise, Christmas happens at the same time everywhere, it’s summer that happens at a different time. In any event, you don’t hear people in Rio singing Eu estou sonhando com um Natal verde. No of course not, they are too busy checking out the floating, lighted trees in the lagoon and watching fireworks displays. But the important thing is they are able to do it outside! In shorts! Now that’s what I call the way to celebrate.

The featured image is from 1869 called American Homestead Winter by Currier and Ives. It was part of a series that also included scenes from Spring, Summer and Autumn.