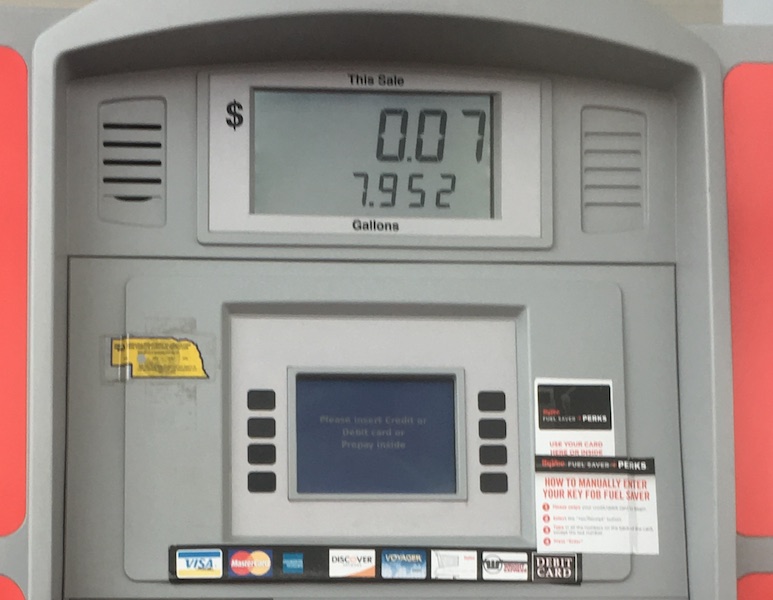 I never save coupons. I’m lucky if I remember to bring the list much less any coupons when I get groceries. But sometimes you fall into a good deal even when you don’t mean to.

Lots of retail chains have loyalty programs. That’s what they call it when you sign up for a card that gives you automatic cents off at check out. The negative side is that these programs are more personally invasive than Facebook could ever be. By your presenting this card you give them the right to tie whatever products you buy to your personal household. For the privilege of collecting this information once in a while they give you ten cents off on toilet paper or some such BS.

A grocery store near us has one of these loyalty programs and Snowball and I use it every time we shop there. In addition to an occasional cent or two off of some product they give cents off per gallon at their company’s gas stations. The savings has to be used in a certain amount of time. “Use it or lose it”.

We don’t usually pay much attention to any of the deals, we’ve blown off more gas money than we’ve saved, and apparently there was recently a major one we missed hearing about. A week ago when we checked out, the clerk was an especially colorful fellow who mentioned that we had so much money coming back at the gas pump they were going to have to pay us to get gas. Then yesterday at the store checkout a similar comment was made. We had amassed around $5 per gallon savings. Gas in our area was less than $3. You do the math.

The good news was the gas tank in the car was reading empty. Unfortunately we were driving Snowball’s little Chevy Spark. Its a great car but it only has around an eight and a half gallon tank. So when we went out to the station to get gas after inserting the card the price per gallon was, and I am not kidding, $0.0009. I did not get a picture of this but you can see by the final readout that we got gas for about a penny a gallon. This will keep Sparky going for probably two weeks.

If this ever happens again we’re bringing the fleet.