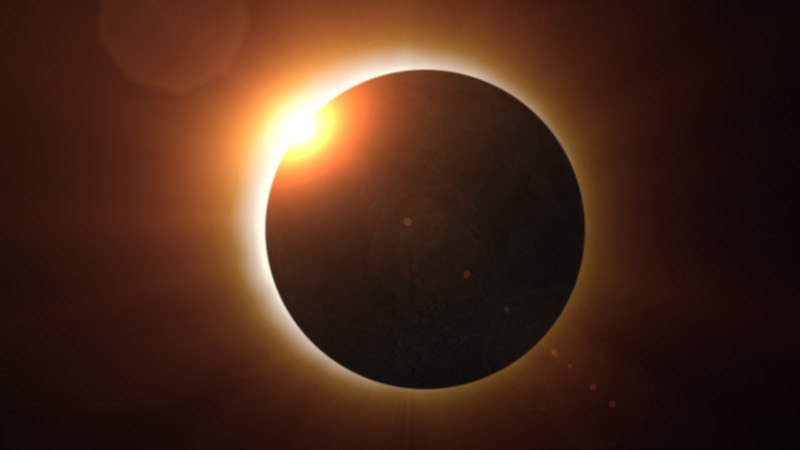 One of the advantages to living a long time is the collection of t-shirts you get that say ‘Been there, Done that’. This week a whole lot of people are going to finally get their figurative t-shirt that says they’ve seen a solar eclipse, a shirt I earned some twenty years ago. My gripe is the media hyping this as a rare, one-in-a-lifetime event. Does this mean I’ve lived more that one lifetime? Or am I just that rare?

I don’t understand all the excitement. Have we become so unfamiliar with nature that a natural phenomenon that happens somewhere in world every year and half garners the special attention of everyone from tattoo artists to doughnut chefs.

Many years ago, some primitive people thought the solar eclipse was an augury that the end of the world had arrived. Others believed a dragon was eating the sun, (my personal favorite). Today every media outlet is showing us detailed diagrams of how the moon is casting a two thousand mile an hour shadow across the middle of the country. In any one spot however, it will only last two and a half minutes; roughly the time of most sexual encounters these days.

All of this hype is making the eclipse the most popular tourist event of the summer. The predicted traffic snarls are forcing many states to restrict the size of trucks moving along the interstate in affected areas for days. People are getting commemorative tattoos during the eclipse, possibly a special danger of misspellings because of the unexpected darkness. And, most important to many of us here on the homestead, Krispy Kreme is making a special doughnut for the occasion.

In the spirit of full disclosure it was only a annular eclipse that I saw previously. But as a somewhat, sorta experienced viewer of this once-in-a-lifetime event, let me give you some viewing hints. First, get the ISO approved glasses and wear them! However it’s important to realize not all of the show is in the sky. If you get a chance to be outside for the couple of minutes take some time to look around without the glasses at the shadows on the ground. The ringed light gives them a strange double appearance. And be sure to notice how quickly the air takes on a momentary chill in the eerie half light.

Whatever you do, try not to get fat on all those solar eclipse doughnuts. You’ll want to be around for the next once-in-a-lifetime time that an eclipse happens in the U.S. in April of 2024.

2 thoughts on “Much Ado About Mostly Nothing”