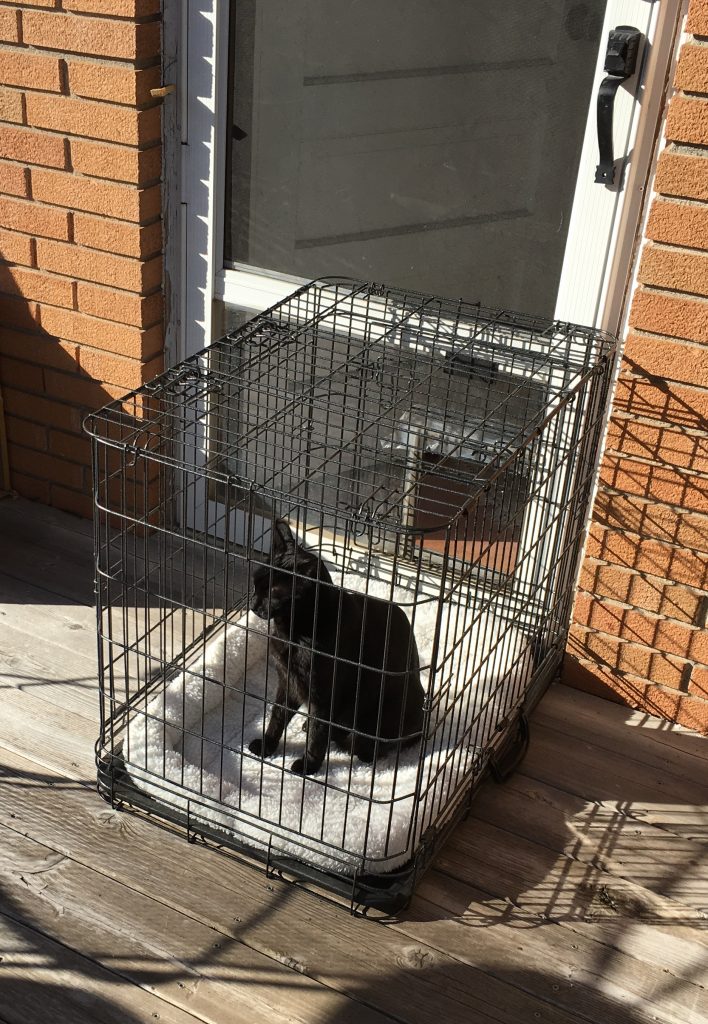 Its not my fault. I was scared. The noise coming from the thing that the ape was using was so loud the neighbors were coming over to find out what is was. And now I’ve been imprisoned in the house for over two weeks.

Let me start at the beginning. It was an unusually warm day. I was having a good time exploring the neighborhood. Of course I was regularly checking in at the compound just to let the apes-who-bring-food know I was around and they should feed me again.

Then I guess because it such a nice day, one of the apes started bringing a bunch of her toys out to the front porch. She was using a fire toy on some metal pieces. The pieces were strange colors and didn’t smell good at all. Then she started using another toy that was really noisy. Later I heard them calling it a grinder. The noise and sparks were so bad I just began running. I ran as fast as I could until I found an open garage and hid under the car in there.

It was shady in there. It smelled bad and there was dust and oil all around but it also smelled like mice. So I started looking around in the piles of newspaper when I heard the door closing noise and it went completely dark. Well thankfully not completely, cats don’t need a lot of light to move around. Besides I was following the mice by sound, scent and noise anyway.

After finding and feasting on a couple of tiny mice, I was still hungry. But the door was closed so I couldn’t get out and go home. I didn’t think I was being punished for anything because I get put in a closed room a lot of times when the apes are moving things around in the house. But they always let me out in a while so I crawled into the car and fell asleep in the seat to wait.

A little while later I heard one of the apes calling my name. He even pounded on the door. I meowed as loud as I could but he didn’t hear me and he walked away.

A while later it started getting really cold. Not freezing cold but I was really starting to miss my warm bed by the heating vent. The only thing I could do was jump back into the car and curl up on the seat again.

I woke up to the morning sound of the birds chirping. I was frustrated that I couldn’t chase them because the apes still hadn’t let me out of the dark room. I was hungry so I looked for more mice and found a couple of stragglers for breakfast. I sat in the dark and howled for the rest of the day but no one ever came to get me.

Then after what seemed like many hours the door finally opened. I scooted as fast as I could to get out of there and started running down the driveway toward home. Then I noticed someone running after me and recognized one of my apes. He picked me up and started brushing the dirt and grime off me as we headed for home. When we got there the first thing he did was put me by my food bowl. I didn’t have the heart to tell him I was full of mice.

Ever since that day they haven’t let me or Roswell roam free outside. They even put bars around the cat door so if we did make it to the back door we couldn’t go very far. Then a couple of day ago we heard the apes banging and drilling on the back deck. Since we had been in prison for so long, Rozzy and I were hoping it wasn’t a cat gallows. It turned out to be just a larger cage. The apes put a tunnel from one of their windows into the side so we don’t have to, or rather can’t, go free outside to get to it.

Roswell and I are not that much impressed. Unless they plan to throw an occasional sacrificial robin in there, it doesn’t look like it’s gonna be that much fun. Maybe when the weather gets a little warmer it will be an OK place to hang out. I saw Rozzy out there yesterday laying in the sun, the little brown nose.