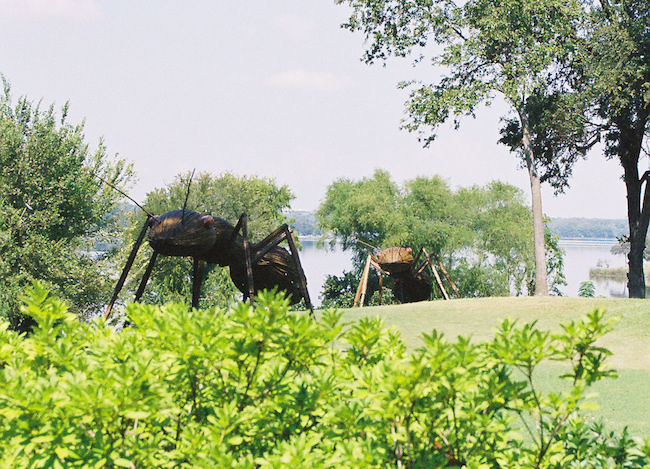 I hate spiders. I consider bugs of any kind a necessary evil but spiders are special to me because of the webs. And yes i know that spiders keep down the population of other flying bugs. And there starts but one of my love/hate relationships with all bugs.

Last summer the webs got so bad it was to the point that I couldn’t see through the cameras monitoring the compound. I found myself going through the back yard every morning, waving a white towel around like some surrendering pony soldier out of the old west, trying to clear the spider webs that had been built over night. I vowed this year was gonna be different.

Last week, a spider web over the driveway camera inspired my lust for the extermination of all bug-kind. I went down to my neighborhood garden supply store and bought an extra large bottle of bug and pest barrier spray for use in my first attempt at chemical warfare against the six and eight legged attackers.

This morning the enemy’s first major strike came. One of their flying troops, a large wasp, came in through the cat door and was searching for a foothold in the space between the screen and the backdoor. Wanting to avoid any large body count this early in the war, I captured the scout in a plastic cup and returned it to the DMZ of the back deck.

A short time later I decided it was time to mount my first counter assault. For my first foray, a completely defensive move, I sprayed the barrier protection around all of the exposed entrances to the main fortress of the compound. In addition I sprayed extra rations of the weaponized poison around the cameras and deck furniture.

After covering all of the tactically advantageous areas I could think of, my desire for slaughter of the enemy had not been satisfied. I returned to the garage to trade my pesticide for herbicide. The tell-tale yellow flowers of dandelion invaders had shown their unabashed audacity to attack the front lawn and I was still in the mood to kill. My only regret in all of this is that it will take time to see the brown, wilted results of that attack.

Ironically, less than an hour later, reinforcements arrived in my war against the bug invaders. Snowball had forgotten to mention that the lawn service was scheduled to use their atomic-level weapons in the insect battle to protect all of the same fortress defenses I had covered earlier. With this two pronged attack formation I imagine there will be no rejoicing in the insect troop’s camp tonight.