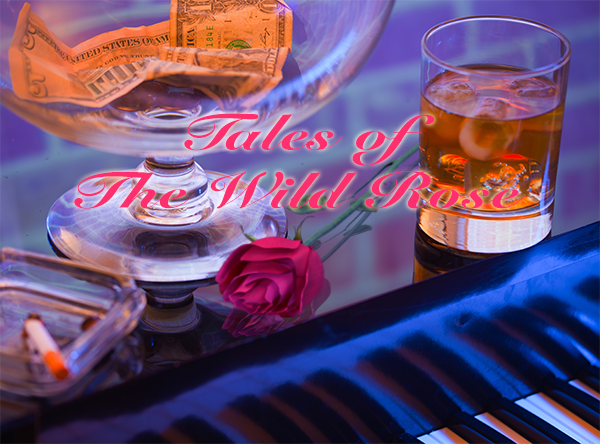 This is a short story from my series, Tales of the Wild Rose. This particular selection has some gore and adult language. Parental guidance is suggested.

It’s always a surprise to run into an old friend after many years. Especially one you haven’t seen since high school. That moment of confused familiarity followed by surprised recognition can leave you unbalanced. Then when you find out the strange life they’ve lead in the intervening years, it can warp your reality.

It all started a couple of days ago when I walked into The Wild Rose. As I came out of the afternoon sunshine and stood by the door getting used to the darkness inside I could already see there was someone in my usual seat at the bar. I was further annoyed because there were plenty of empty stools and mere chance landed someone’s butt in my spot. So I reluctantly picked an alternate seat a couple of spaces over. The owner, Kenny, was behind the bar and already had my bourbon waiting.

I looked over at the thief who had stolen my spot. He looked about my age but like he had spent most of his years outdoors. Not necessarily in the sun just wind-worn and road-weary. His army fatigues had seen better days long ago too. Next to his half empty beer glass on the bar sat a beat-up straw cowboy hat and some old aviator sunglasses.

He must have felt my stare because he looked up from his beer and turned my way. At first I thought he had the darkest eyes I’d ever seen. But as I watched the blue-gray irises began to show and I realized they had just been completely dilated. He sniffed the air in my direction. The puzzlement in his eyes matched mine as we both tried to figure out where we knew each other from. Then it hit me! “Micheal Kingman! I haven’t seen you since Central High.” I almost shouted.

Mike and I had started high school the same year and had been each others wing man lots of times. Many of our adventures had been on the barely legal side such as happens to sixteen-year-olds trying to push the boundaries of their new-found freedoms. After junior year we lost touch. He moved away or some such story and I struggled just to finish high school at that point.

He quietly smiled and offered a strong handshake. His hands were as rough and wear-worn as the rest of him. “It’s good to see a familiar face” was all he said.

I was bursting with questions. “I’m guessing from the fatigues you’ve been in the service. What have you been doing for the last forty or so years?”

“Well, after that scene where I punched out the principal and got kicked out of Central, I got my GED and joined the Marines.”

That solved a forty-five year old mystery, I thought. Mike looked like a weight was being lifted, the words just pouring out of him. I began to get the idea it had been a long time since he had someone to talk to.

“When I went in I thought I was gonna be a lifer.” he continued, “A few years in I signed up for a special program. They wanted guys to become trackers. At the time we were told it was gonna be like following escaped prisoners through forests and stuff like that.”

Mike looked around. The bar was empty at this time of day except for the two of us and Kenny who was engrossed in his Wall Street Journal. His voice lowered. “The program was intense. We got the same survival training they use for S.E.A.L. teams. We learned what kind of trace and track every animal made from mice to man. They taught us what to look for in disturbed tree branches and bent grasses.”

“And there was the medical treatments. They gave us stuff that made changes so we could see in the dark. I can see in moonlight like you can see at noon. And I can smell the slightest scent on the wind. I think that’s the worst thing they did to us. It’s so hard to shut off the bad smells. I have to spend most of my time outdoors because I can’t stand the smell of other humans in close quarters anymore. And I can’t go out in the daytime without some serious eye wear.”

Mike picked up his beer glass and drained it while barely breaking verbal stride. I signaled Kenny for another round this time making mine a soda. “After all that, ten years later the funding stopped, the program just ended and they kicked us out of the service. Now I’m a free-lance tracker. I get good money for it too. Did you hear about that prison break in New York last year? I lead them there where the cops killed the first guy. Oh sure I got a great pension too but it will never make up for the things they did to us, or the things we saw. Weird shit…” he trailed off and stared at his freshly filled beer glass.

“What kind of weird shit?” I wanted to know. I’m always up for a good conspiracy story.

“I shouldn’t tell ya this but it was long ago and its been declassified. Many years back, there was a town in eastern Europe that was being harassed by some creep. The locals thought the guy was doing some kind of ceremonial ritual sacrifice. He would go into town once a month around the full moon and kidnap someone. Then a couple of days later they would find what was left of this victim by the river. The body always looked like it was almost completely eaten by wild animals.”

“For some reason the higher-ups in the Pentagon got interested in this guy. They thought he might have some kind of stealth tech since no one could trace who he was. But they couldn’t get sanction so no one in the village could know we were there. On the next night of the full moon two teams of us were dropped off, one on the east side of the town, the other team on the west side. Our mission was to hang around unseen till this guy made a fresh hit. Then we would track him through the forest and eliminate him. Using the full moon for light it should’ve been easy.”

“I was on the team on the east side. Sure enough around midnight there was screaming in the village. We heard running so we headed toward the trails in the direction of the sounds. When we got there we could see lots of tracks covering over each other. Mostly human but lots of animal tracks too. There was a scent that none of us had ever encountered. Ya’ know how dogs like to roll in smelly stuff? Well this was like a big dog had rolled in human shit. So since the tracks kept changing we followed the unusual scent.”

“This guy could move fast. Besides the scent we could hear movement through the underbrush. We followed for about twenty or thirty minutes. He stayed well ahead of us the entire time. It was obvious he knew the forest. He must have had some kind of night vision tech too because he had no trouble getting through the trees.”

“Finally we heard sounds just up ahead. They were more like animal sounds than human. And we could still smell the shit-covered dog scent stronger than ever. Thinking we’d stumbled on a pack of wolves we split up to surround the area. As I got closer the smell of human blood was overwhelming. Then I saw why. This guy had strung up his human catch like cattle in a slaughter-house. But instead of butchering these people this guy left a wolf to feed on them. The animal was up on its hind legs. It looked like there was a knife in his paw. Then I saw his paw had long claws, sharp enough to tear the skin off the bodies.”

“Well, none of us had ever seen anything like it. We all just opened fire. The cross fire created a kill zone. When we stopped the wolf was gone. There was a giant of a guy there – quite dead. But he hadn’t been killed by our arms fire. Instead it looked like he killed himself with a silver bladed knife.”

“We never found any of his tech. The killings in the village ended. Oh yeah, I snagged the silver knife for a good luck charm. They pulled us out of there that night and we went to our next assignment.”

Well that had given me a lot to think about. He was looking uncomfortable so I changed the subject. “So Mike, what brings you back to the old home town? Got family to see?”

“No, all my family’s long dead or gone. I actually got an assignment here. Seems you guys had some mountain lion sightings on the west side of town and the state patrol wants me to go out with them to try to find it.”

“Typical”, I said. “We could have anything from mountain lions to alien abductions stealing children on the east side and nothing happens. But threaten their precious gated communities out west and they send lawyers, guns and money. Nothing personal, Mike, just sometimes this town pisses me off.”

He chuckled, “Well in any event, I’m gonna use the full moon tonight to track this cat. Hey if you’re up for it, you’re welcome to come along.”

“Geez, Mike, I would really love to see you work but I’ve got a shift tonight. I tend bar here part-time and I’ll be working to close.”

“Too bad,” he says finishing his beer, “Well hopefully we’ll run into each again soon.”

“Hey, sounds good. You can always get hold of me here,” I said.

He put on his beat-up hat and sunglasses and walked out the door in to the last of the afternoon sunlight. I headed for the back office to clock in.

Usually when you tell someone who you haven’t seen for a long time that you will meet them again soon it never comes to pass. This time little did I know how soon our paths would cross again.

Watch for The Tracker Returns, the sequel to this story coming Friday.