It became apparent to me that many have forgotten these truths during my last foray into the world of… “dut dut dut duuh”… shopping in a real store, instead of online! Even at a normal department store, the aisles are full of people talking on a cell phone to someone who is not shopping with them. I’m only guessing here because among others I saw two people who seemed to be with each other, but each on a cell phone to someone else. Gawd, I hope that’s the case because otherwise they were talking to each other through the phones only inches apart. Doesn’t anyone realize the companionship they are missing out on? Unless your only goal is a quick trip to get new underwear and socks, shopping is so much better as a shared experience. Next time they should take their phone friend along.

Then while driving home, I saw several people walking down the street also talking on the phone. Now this practice I can see as sorta a safety precaution, who knows what kind of crazy you can meet on the street, but what in the Hell do you folks find to talk about? It may be just a guy thing, but my entire phone conversations usually consist of “Hi, when are we meeting? Ok, Thanks, See ya then, Bye.” In other words I usually only use the phone to set up a time to meet face-to-face.

There used to be a phrase that mothers used to guilt their kids that went, “You never call, you never write.” Even that is useless now. Today, all a mother has to do is check their kid’s Facebook page and they know where they are, who they are seeing and if they are eating good. My daughter lives several states away and in years long ago we used to get on the phone and talk for several hours every week or so to get caught up on what our families are doing. We don’t do that anymore because all I have to do is check their page and I get a hour-by-hour account of their actions. It’s just one more opportunity for personal interaction that technology has stolen from us. 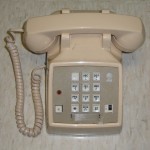 This is a true story – many years ago I was training a group of people on how to use the height of home technology of the time, the Commodore 64 computer. (You might have to Google that one.) During one class, a student asked how long I thought it would be until everyone would have a computer in their home. Mind you this was back in the ’80s. Moore’s Law was still in effect and cell phones were still an unheard-of laboratory experiment. To answer the question I pointed to the desk phone. I’m sure you’ve seen pictures of them. It had one piece with buttons on it connected by a cord to another piece you put up to your ear. The whole thing was wired to the wall. I said, “Computers won’t become popular until they are as easy to use as that phone on the desk.” I may not have been far from wrong but little did I know it was the computers that were going to have the phone in them.

So kids tonight as you say your prayers think about how far we’ve come. Then, next time you are talking to your parents, hopefully face-to-face, ask them what kind of technology they used when they were your age. As you try to digest their answer, imagine what you’ll be saying to your kids when they ask you that question. And better still, what sort of device you’ll be using to answer them with.